Earthworms- how do they increase soil fertility? 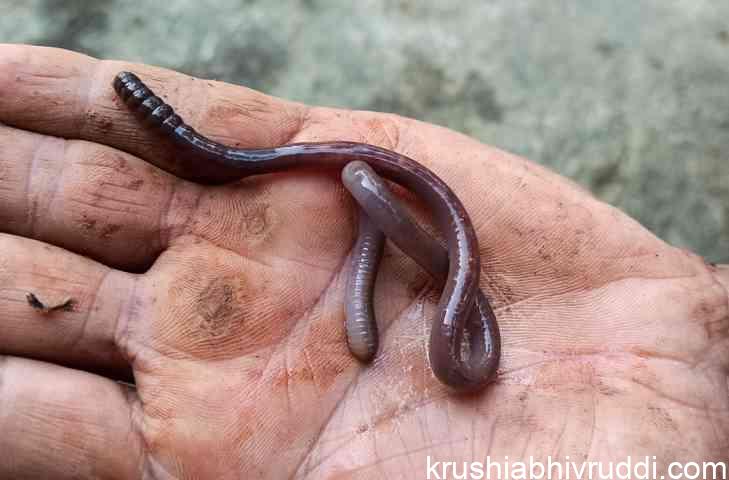 Earthworms help nature in her overall soil-building and plant growth process through particle breakdown. It may occur in the E worm gizzard which uses ingested mineral particles in small pieces. This grinding process, coupled with the weak acids and enzymes in the gizzards probably the small grinding stones down into even smaller pieces. Now E worm role in solid waste management is immersive. It consumes all kinds of organic matter and they can eat their body weight per day. The passage of organic matter through E worm promote bacterial and actinomycetes growth. The worm mixes the material, aerates the heap, and hastens decomposition.

There are two groups of E worms. Most people think all are the same. It is not correct. One is Humus formers and another is Humus feeders.

The first group ie. They are surface dwellers and feed on nearly 90% fresh organic matter and 10% soil. These are generally red and have a flat tail. They are also called epegic or detritivorous worms. These worms are ideal for vermicomposting.

The other group ie. Humus feeders involve deep borrowing worms which feed on nearly 90% soil and 10% nearly degraded or humified organic matter. Hence the name. Generally, they are faint colors and are useful in making the land porous and mixing and distributing humus through the soil.

Earthworms turn over the soil:

Land loosening is the main cultivation practice done by farmers. If your farmland is having sufficient worms it will do permanent ploughing. Cultivation by ploughing is temporary means of loosening and aeration the land.  Worms burrow and feed big quantities of organic matter and soil. After digesting it, extract its food value and excrete the residue. They take in organic matter from the surface and deposit it as castings in the lower land levels and then take soil from the lower levels and deposits it in the levels, providing decaying organic matter rich in nutrients and minerals at a lever where they can be used by plant roots. They make a layer of fine smooth topsoil rich in minerals extracted from the mineral stones in the subsoil. It is estimated that E worms turn over 100 tons of soil, or more per acre per year, and build a fine topsoil layer at the rate of two inches per year.

Soil turnover by worms also has a mixing effect in land without worms there are generally distinct horizontal layers of material fresh organic matter decaying humus topsoil, subsoil, etc. But E worms generally mix the layers so that they are indistinguishable. This action keeps the soil loose and porous. Providing better aeration drainage and moisture retention. In addition to distributing the organic matter and minerals throughout the land for better utilization by plants.

Earthworms excrete and soils contain more phosphorus and molybdenum. Exchangeable calcium, magnesium, and potassium have a higher base exchange capacity than soil without worms. However, the nutrients in the caste building both those which are available and those still in an unavailable form depend on the content of the organic material and mineral salt. The E worm can’t provide or make available nutrients that are not in the organic material Experiments conducted at many research stations, show that E worm casts contain approximately five times more nitrates 7 times more available phosphorus three times more exchangeable magnesium 1.5 times more calcium 11 times more potassium than the surrounding soil.

Many researchers have found a significant difference in the quantities of microorganisms in their digestive tract and casts. Quantities of microorganisms are three to five times greater in the castes than in the surrounding soil. It has also been reported that there were greater numbers of bacteria and actinomycetes in its digestive tract than in the surrounding . These numbers increase exponentially from the front and the rear of the digestive tract. There were more actinomycities fungi butyric acid-forming bacteria and celluloses decomposing bacterium in the caste and digestive tract is proportional to the quantity and quality of the organic matter in the soil. It also depends on environmental conditions. It is also reported that worms may produce an antibiotic substance that inhibits the growth of certain fungi and non-acid-fast pathogenic microorganisms.

Earthworms appeared to have healthy control apple scabs caused by substances being released in springtime from leaves that fell the previous fall. The worms remove the leaves from the surfaces preventing at least a part of the infection, hence studies proved that E worms can improve the land both structurally and chemically for the better by their acting accelerating compost formation providing the missing link between natural farming and organic farming. The objective of this research was to find ways of rapidly recycling natural resources. They themselves provide lots of bacteria and microbes to the land through their excretion. These activities are done only by Humus feeders.

There is many of organic waste in farmland and our surroundings. If there was the absence of E worms and other decomposing agents it will remain as it is. Nature has made unique arrangements to decompose all organic matter by many organisms. The worm is one among them. The surface feeder worms play an important role in the biological degradation of almost all organic matter. If one plant died it will incorporate into the land by worms and others. The fragmented organic matter is mixed with enzymes in their digestive tract. These enzymes in turn synthesize organic compounds which stimulate microbial activity in the worm’s intestines. The microbial activity then starts the decomposition process. Approximately 24 hours after ingestion the worms excrete this fragmented organic matter in the form of casts on the surface of the land and at various levels within the soil.

If organic matter is smaller in size, and contains some synthesized organic compounds and microorganisms from the E worm’s digestive tract microbial activity and subsequently decomposition processes and enhanced. E worms consume large amounts of food. It is estimated that depending upon the population of worms (nearly 1 lakh) may consume 12 tons of manure per year per acre.

E worms are always active in moist land. In the rainy season, we can find the highest number of worms on the land surface. In summer they go subsurface. If we provide sufficient moisture always they are active all season. Excess moisture will kill the E worms. In waste management (Compost making) around 60%, moisture management is very essential.

Earthworms are natural cultivators and soil conditioners. If our farm is having sufficient organic matter it will automatically increase its population. The land cover (weeds) is the ideal condition to increase the E worm population.