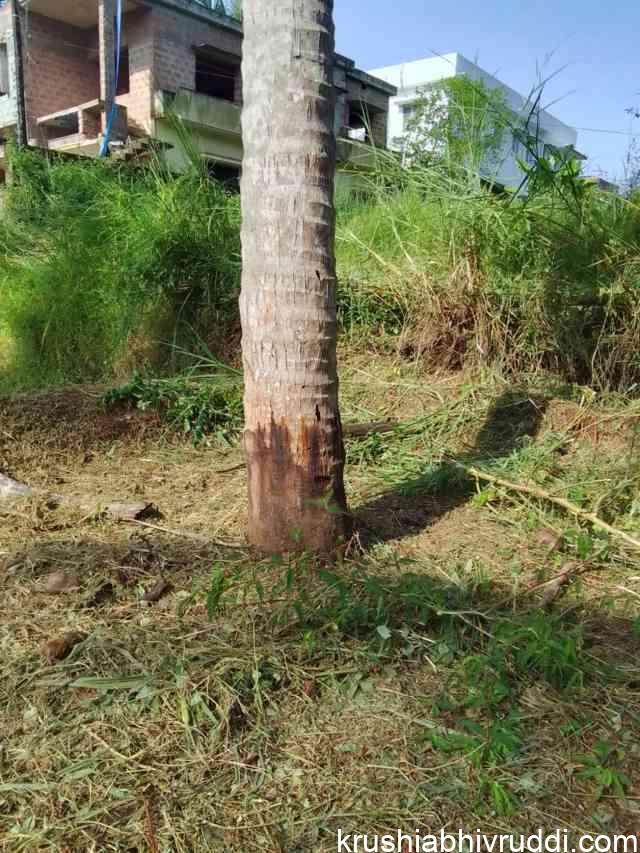 Stem bleeding in coconut palm is a major disease that ends with the death of palm. Cow dung pasting to the infected part will cure this in the initial stage. Its control is not the big thing. Initial identification and proper treatment will cure this disease and prevent its spread. We can discuss the chemical and no chemical measures for controlling this disease here.

One of the reasons for Stem bleeding is unfavorable soil conditions. High water table, acidic soil, and alkaline soils are considered predisposing factors for disease.  It is one of the fungal diseases by Thielaviopsis paradoxa. Along with this fungi, two more organisms Phomopsis cocaine and Schizophyllum commune are also associated. The fungus is a wound paradise and finds its entry into the palm through cracks and wounds which are common on coconut stems. The disease affects palms of all ages. A few years back its incident was only 1-2 % but now it is increased to 3-4 % in coconut growing areas.

How to identify this disease:

The first symptom of this Stem bleeding disease entry is nut dropping. Next, the leaves of the palm will become pale or they will shed down to the stem. On this symptom, you can find the reddish brown-colored sap oozing on a stem. The bleeding will be any part of the stem. It is like a patch. If we observe late the bleeding will spread more. The disease is progressed palm will gradually die. This disease is more from July to December. This oozing starts from the inner part of the stem tissue. If Tree is not in normal look, first observe the stem. If any change in stem color or any sap is found you can suspect this disease. Yellowing of the leaf is also a symptom. Where there is no proper drainage there we suspect this disease.

In the initial stage, only the control measures work. Where the oozing we find there we have to cut or remove the discolored parts with a sharp chisel. It is very hard to remove all infected parts. When cutting it will become a big wound on the stem. After cutting all infected parts we have to paste some systemic fungicides like metalaxil or  Fenamidone and Mancozeb. After this treatment cement plastering should be done for wound parts.  When bleeding starts some spreading flies will attract. They suck the sap and spread this t healthy palms also. So plastering the wounded portion is very important.

In the initial stages of infection this treatment will work well. The fresh cowdung will be pasted to the stem where the bleeding started. It will stick on the stem for more periods. In this treatment, the bleeding will end gradually and the leaf will get strengthened.  Cowdung will stop the spread of fungus and automatically plant will become normal. The methanogenic bacteria will suppress the fungus multiplication. Many farmers do this and observed satisfactory results.

Some farmers do heat treatment to infected parts to kill the fungus. It also works if it is done systematically. Burning by a small flame by a stick cloth coated will oil. Mud oil painting also dune somewhere.

Recovery is only in the initial stage:

If we observe in the first stage it will be recovered. If it is turned to the 2nd -3rd  stage it will spread to almost all parts of the stem. Its inner tissue is decayed and the chances of recovery are very less. If we retain the severely affected trees it will spread to nearby plants also. Last stage attained palms are uprooted and treated will chemicals to avoid the disease spread and other pests like red palm weevil attach. Now many coconut growers face this problem and they have to do keen observe continuously to retain the yielding palms. If a yielding palm is prone to this disease it is a heavy loss to them.