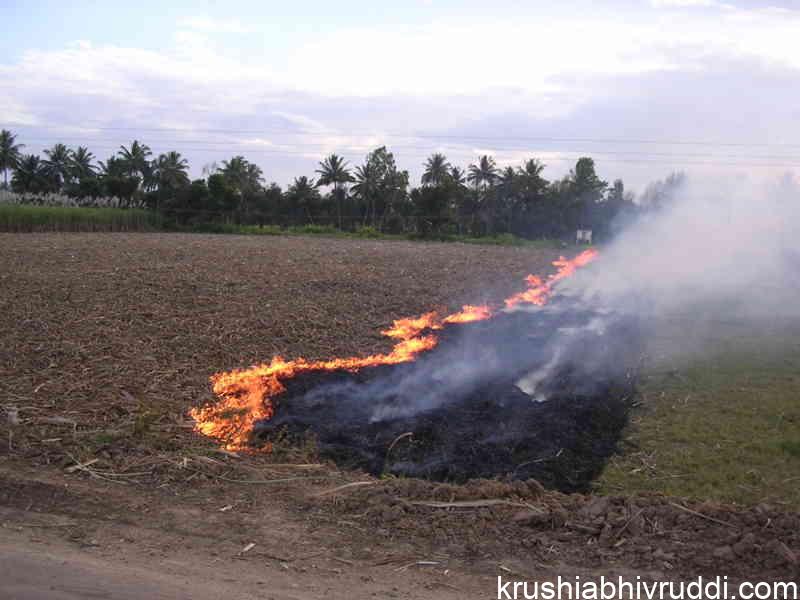 90% above sugarcane farmers still follow thrash burning in sugarcane, because, they  realized the advantages of this. It is the cheapest method of disease control.

Sugarcane is one of the main commercial crop in India. According to statistical survey, in India sugarcane is cultivated in 4.32 million hectares of land and every year,  300 million tonnes of  canes are produced.  Sugarcane is mainly used for the production of jaggery and sugar. Karnataka, Maharashtra, Uttarapradesha  are the major states involved in the production of  sugarcane and their value added products. But farmers are facing the problem of decline in the yield, post harvest loss,  poor quality canes due to the attack of some common diseases. Even after the harvest, on the way to sugar factory, disease become severe and resulting in the heavy  loss of canes. Ultimately farmers are sufferers. They won’t get  reasonable price for their crop.

Almost all field crops most of diseases spread from crop residues. If we burn the crop residues further  spreading will ends. In this method farmer can grow same crop in  same field. But there was controversy in this practice. Instead of  burning there are some other methods to preventing pathogens . But all are costlier than this method. Farmers believe this method.

One of the reason for Haryana farmer’s protest against central farm bill is against stubble burning. Farmers want easy and cheap method of disease control. Administration is not allowing this for environmental issue.